I am trying to be a bit better about logging my workouts but I still need improvements in that area. Some people do a workout and immediately upload the Garmin file, export, import, and export it again until the data lands in the right place. I am a little behind the times. If I can even remember what I did at swim practice I am pretty happy, never mind logging the set, duration, equipment, and total distance. I have been trying to put more effort into logging my workouts with Athleticore because it really is neat to see changes in the amount of training I do on a week to week basis and the breakdown of swim, bike, and run percentages. I have tried several other training logs and they are just too much for me. Athleticore is simple and easy to use without all the extra fluff. It helps me see exactly how little I run so I can confirm on a weekly basis why my run is my weakest leg . . .*sigh.*

Run: 12.3 mi
Bike: 140.9 mi
Swim: 11,555.0 yds
Tuesday night I decided to do my intervals at the booty loop. I normally just use the 3 mile booty loop to ride easy with friends but it was supposed to rain and I was not sure I would be able to get to a safe place to complete my intervals in time. I really enjoy riding the booty loop as it is the course for the 24 Hours of Booty LiveStrong Fundraiser and you will almost always run into someone you know also looking for a casual ride. The booty loop, however, is not but it is not the best place for intervals, pacelines, and hammerfests. During the afternoon rush hour, it can be quite dangerous and I will admit a lot of cyclists take advantage of the loop, disregarding traffic laws and general courtesies. During the 90 minutes I was on the loop I saw two accidents involving people I knew. The first one was a rider-rider mishap in which control was lost but no one hit pavement. The incident could have been a lot worse but luckily just a few nerves were rattled. The second incident involved a teammate of mine from last year’s 24 HOB. Vespa and I were about 150 behind a paceline that formed at the stop light. The group was picking up speed when a car suddenly decided to turn right, suddenly aware of some available parking. The driver turned right into the paceline cutting off Brother Bacon. It is never a good thing to look up to shouts, a car, and a flying cyclist. My stomach was in knots as I rode up to the scene to see Brother Bacon laying on his back, motionless in the grass. Fortunately he was more stunned than hurt. Thanks to a little bit of luck and some pretty good bike handling skills, BB had turned his bike with the car so he fell more-or-less over to the side rather than getting launched over the car. A few dents to the car, a couple of nicks to the bike, and a scratched up ankle were the only evidence a crash had occurred when Brother Bacon got up and thankfully walked away.

I feel like over the last couple of months there has been one cycling fatality after another. Just down the road a hit and run left a visiting cyclist for dead. Last year another one of the Donald Haack riders was in an accident putting him in a coma and months of recovery therapy.  I will admit when I get on my bike I wonder if this will be the day where everything changes, if this will be the day some car sideswipes me out of anger or cuts me off simply oblivious to the cyclist on a yellow bike and wearing a white helmet. I often ask myself is it worth it and every time I answer, ABSOLUTELY. I do not know what it is like to be the type of person that goes to work, eats dinner, and then watches TV until it is time for bed day-in and day-out. Cycling gives me so much in terms of friendships and camaraderie, a sense of completion and accomplishment, a freedom to ride through the outdoors with nothing but my will pushing me forward . . . not to mention the ability to shamelessly wear spandex and lycra for hours on end. I just can’t imagine a life without it.

Speaking of cycling, I after my workouts Saturday I went to catch the Dilworth Criterium races. I made it there just in time to watch the last 20 minutes of the Pro Women’s race and I ended up staying until the Pro Men’s race at 4:00. I have no idea what it is like trying to race a bike through a mile course littered with uphills, downhills, and tight turns but it looks both terrifying and tantalizing! Check out these pictures from the races: Mr. Weldon's Fabulous Photos are here!

Oh, speaking of racing, I am supposed to race this weekend. Hopefully the race will not be cancelled, shortened, or altered in anyway like all the other races this year. The White Lake ½ Ironman is my first race of the season. I was hoping to ease into the season with a sprint, just to get my feet wet (and to remind me of the pain of racing vs training). I would even take a pool swim, just work out the cobwebs and remember how to find my legs. But nope, starting off with a bang! Each year there are two White Lakes. Last Saturday was this first one. Unfortunately the swim was cancelled at that race due to fog. Vespa and Haycraft GTWD both succeeded in tackling the newly made duathlon and throwing down some pretty impressive bike and run splits. Except for the fog, the conditions could not have been more ideal. The water was smooth and calm, little wind on the bike, and a slowly warming sun all thanks to the low hanging clouds. White Lake is famous for being miserably hot and those are exactly the conditions I am hoping for. Am I ready? No. I am painfully aware that I am not “race fit” but I am hoping my limitations this go around will be a good spring board for my future races (hopefully without a belly flop). I did this same race 5 years ago when the run winded through the neighborhood heat trap. I heard it has changed since then so I am eager to see the new run course. I was home sick from work Monday so we will see what happens. Professor Flufferton and I bonded over Harry Potter. I read, he slept. 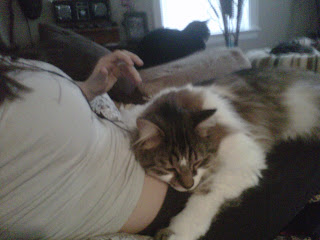 Mancess quote of the week:

“Chewy and I are racing the pet-palooza 5K this weekend. It is really going to be up to Chewy if we win or not. This morning he could only run 8:30s but last Thursday we threw down a 6:15 mile. We ran a 6:15 because he likes to chase people on bikes. What I need someone on a bike at the start.”