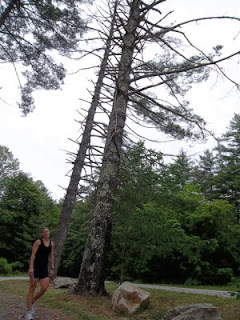 Well I have been a week behind in posting so I am going to catch up today . . . finally. So far this season I have not expereienced a great amount of fatigue in my training but the last two weeks have been tough. I traveled to Tennessee one weekend and on the way I got in some quality workouts in the NC mountains. The trip threw my schedule a little off and subsequently required some doubling up and some catching up. I think the training, the scheduling, and the travelling combined to have a real impact on my level of fatigue. So much so, this last weekend was the the first time I really felt like I was struggling to meet my target in my workouts.  These past two weeks were my last big push going into my taper for the Muncie 70.3 - both my bike and run total miles hit their peak so far for the season. The training and trying to squeeze in everything else just reminded me how important it is to always strive for balance first then everything else will fall into place. While I have not officially started tapering yet I think I have rounded the corner to where I have reached a balance and an appropriate level of recovery.

Taking time to train in the mountains is a decision I should have made sooner. I was so excited to move from Charleston to Charlotte due to Charlotte's proximity to the mountains. It is not that I do not enjoy the beach but while I was in Charleston I really missed the trees. Like most us I got stuck in my day-to-day, weekend-to-weekend routine. Everyone's routine turns lackluster if you don't mix it up. So rather that get up at the butt crack before dawn and submit myself to the jesters and jeers from AquaGeek, I slept in a bit and started my day's workout with an awesome open water swim in Lake Glenville. Peaceful, quiet, beautiful, and no black lines. I rarely have the opportunity to train in the open water so I really enjoyed the expereience. The water was calm and the lack of boats made it really easy to focus on my stroke and spotting techinque. If you want to work on your spotting technique, what better way than to swim and have to spot boats before they spot you - ideally before they run you over.

The swim was so wonderfully refreshing I found myself a little hesitant to jump on the bike. Last year, I trained on the Tour de Cashier route in preparation for the hills in Hawaii. It is a tough course with 2 big climbs, 25-30 mins of unrelenting seated pedal mashing. Even you make it through the big climbs you still have several spits, or grunts, to climb that don't quite show up on an elevation profile. The most I have done of the route is 80 miles. One May I will sign up for the full century. This ride taught me two things 1) My compact crank (which I did not use last year) will not cut it on this course - well the crank might but I definitely need to throw on a different cassette next time. 2) My ability to bomb down hills has been downgraded from mediocre to pathetic. You know you are bad at going down hill and turning when you almost have to come to a complete stop to make a turn. I thought I had really "turned the corner" last year when I only had to lightly feather the brakes. I was full on white-knuckling it this year. Good thing I got a lesson in turning from the Master last night. Let's just see if I can put his tips and tricks into play. In the meantime, if you see me out on the road and a corner is coming up, just give me some space, especially on my left side. Unfortunately, I had to cut my ride short mileage-wise because it was getting late and I still had to run. This is where sleeping in is overrated. I did not hit my target miles for the day but in terms of time and watts, I was right on it. 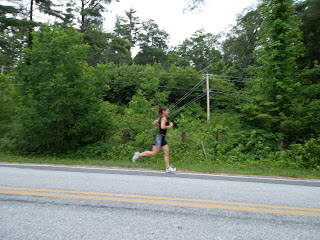 I did not like cutting the bike miles short but since I put the time in I felt like I would be ok. If I held the same watts for the same time in a place like Charleston, for example, I would have gone over my mile target for sure. One thing I definitely did not want to do was cut my run short! So after finishing the ride I hopped off my bike to finish the day running repeats on the Lake Glenville Dam - lake to one side, steep rocky quarry on the other - it was the only relatively flat piece of road I could find. Despite a long day of pedal mashing I felt surprisingly good and light. Unfortunately my long run the next day did not feel quite the same. Less than two miles into it I hit a long uphill - 9 min mile avg going up, 6:45 going down. It hurt. A lot.

I think the locals found my excursions both puzzling and amusing but everyone was super nice and willing to share the road with me since there are no bike lanes or shoulders. I am convinced this area of NC can create great athletes (probably already has). Maybe I can ride nature's coattails to greatness!