I spent this past weekend in Charleston. For those of you who don’t know, I moved to Charlotte from Charleston at the end of July 2009. Despite being ready to move from Charleston, I am always ready to go back for a weekend or two.
Saturday I got up early to have coffee with my two best friends before heading out on a bike ride. The weather was a little iffy with rain clouds coming from the north. In retrospect I should have waited but I was eager to get out on my bike. Normally I take the time to swim with my old Master’s team Saturday mornings when I am in town but I skipped it this week. Magnus (VonPounderson) dealt me a pretty good 4K whopping Friday at the MCAC. This worked out well since it gave me the opportunity to sit down and enjoy a good cup of coffee before hitting the road. I clipped in and headed towards the Ravenel Bridge only to find it closed to all vehicle and pedestrian traffic.  I later found this article on the wreck. What a terribly unforgiving and unnecessary accident. Since I did not have access to Mt Pleasant and the Tour de Bridges (my personal favorite bike ride includes riding over at least three of the main bridges in Charleston). I headed towards the tried and true Folly Beach route. It was a great ride mixed with cold winds and a light drizzle but the roads were quiet and scenery was awesome. Why do I like riding in Charleston? Well the ride looks like this: 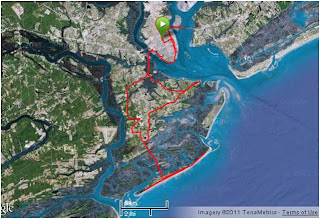 Yeah see all that blue? It is called water. We don't have anything remotely like this in Charlotte. Unfortunately with the water comes wind and the wind is always brutal when it comes to riding out at Folly. Consider yourself lucky if you get a tail/head wind because most of the time it is a swirly mess of a mental and physical beatdown. Part of me loves it, part of me cringes at the thought.  Riding along the "Edge of America" aka Folly Beach, I stopped to enjoy a Ciff bar and watch the surfers. Do you think you are dedicated? You need to talk to a real surfer. They don't care what temperature the air/water is. If the waves are good they are in there. It was a perfect morning for surfing. The ocean was smooth as glass, the wind was steady, and the waves were perfect. It would not surprise me one bit if some of these guys had been out there since 5AM. 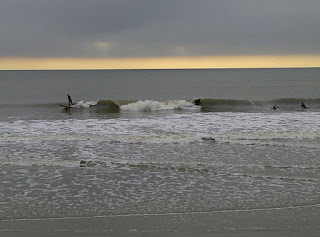 I was surprised at how few cyclists were out. Later in the day I realized I should not have been surprised as I was the one who insisted on riding in the early-cold-gonna-rain-any-second morning. By the end of my bike ride, the sun was out and it was beautiful. I stopped at one of my favorite hidden gems on James Island. It provides the best view of the Charleston peninsula but I opted to take a shot of the Ravenel bridge instead, my next destination . . . (right between the two diamonds to be specific). 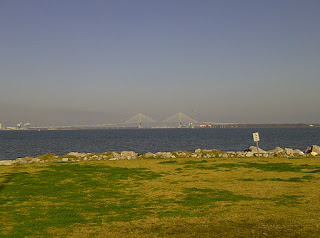 I rode back downtown and back to the Ravenel Bridge hoping it was open again. It was still closed to vehicular traffic but they were letting bikes and pedestrians on the path way. I rode to the top of the bridge and back with probably the world's largest grin. Since I did not swim, I completed the day with a little runneroski. Just a little jaunt to swing me by colonial lake and through the College of Charleston campus. It was quite awesome.
Charleston is a great place and will provide the perfect setting for training this summer as I prepare for IMCZ.
Posted by CodaCoaching