Ahhhhhhhh Munice. Few people here on the East Coast have ever heard of Munice, Indiana. It is a small city about one hour east of Indianapolis. Its claim to fame is Ball State University whose claim to fame is centered on being David Letterman’s alma mater. Aaaaaaand that’s all I know about Muncie. Muncie reminds me a bit of White Lake . . . but a little bit better. Last year I did the race in its first year as an Ironman 70.3. Prior to 2011, the race had a 30 year history as the Muncie Endurathon. I even found a thread on Slowtwitch about the history of the endurathon. Last year I got such a hometown vibe from the race, kinda like the world championship of the Midwest. It was cool. I liked it. I looked forward to going again this year.


Picture this . . . Muncie . . . Friday July 6, 2012 . . . corn fields as far as the eye can see . . . it is hot, really hot. I drive to the little town of Munice. My car is full of empty water bottles I need to refill before I make the drive back to Indianapolis. I make it to the small convention center. The triathletes look so out of place in this small town with their white hip sunglasses, smooth tan legs, ever present visors, and cooling wicking T’s. I walk right up to registration, going from one table to the next, forms, packets, numbers, bookbags, t-shirts, chip check, body marking . . . always so exciting. I fill my water bottles and turn to leave. BUT then I get a text message:

“Is it really going to be an Olympic??”

I laughed out loud. Some people are just freaking crazy, I thought to myself. I feverishly texted back:

“I just walked through registration and no one said anything.”

Long story short, after 30 minutes of asking every volunteer I could find, I finally got a definitive answer, yes the course has been shortened to a 1 mile swim, 30 mile bike, and 6.2 mile run.

I cannot tell you exactly how I felt at that moment, realistically probably a mix of relief and disappointment. It was hot, hotter than White Lake hot. If the National Weather Service was right, race day was going to be brutal. Nonetheless the call was the call and the race director was not about to hear my opinion on this issue. Nothing left to do but strip my bike to the basics and add some ez laces to the running shoes (As a side note the Brooks Ravenna 3s do not like EZ laces as attested by my 6 blisters). 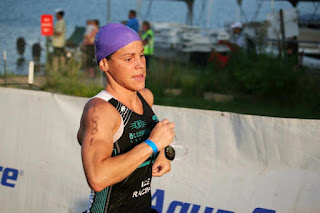 Race morning my brother and I left the house at about 4:15 to make the drive from Indianapolis to the Prairie Creek reservoir. Setting up transition was quick and I had just enough time to go for a short warm up run before they closed the transition area. I still had about an hour before my wave so I got in a nice swim warm up before heading to my corral of purple caps. When the gun went off I took a moment to thank Ironman for giving the wave in front us yellow caps, the same color as the first row of buoys. I later thanked Ironman again for giving the wave right before that one orange caps, the same color as the second row of buoys, but I digress. The swim was rather uneventful but the course quickly got crowded. By the end I am fairly sure I made a couple of people mad. I promise it was entirely unintentional but bodies seemed to appear out of nowhere! It was a good study on the triathlete swim stroke but I will have to come back to that topic on a later day.

Coming out of the swim I felt great. Luckily my bike was racked on the last bike rack so it was relatively easy to find. After throwing down my cap, goggles, and speedsuit I donned my new-to-me aerohelmet - first time wearing in a triathlon! I later received an email stating the following: 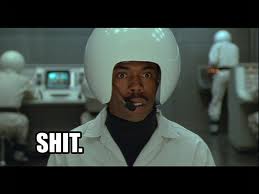 Heading out on the bike course I had no idea where the course was going to take us. The bike course turned out to be a double out and back on the west side of the lake. Leaving transition we headed up around the west side of the lake, U turned, back down, U turned, and heading back up finishers took a right around the lake and back into transition. The first stretch of the ride was a little crowded but it was manageable. It was not until the second loop that things got a little crazy. Everyone from the later waves were dumping out on the course as I was heading out on my second loop. It was a bit of a crowded mess and it got worse as I approached the last U-turn/turn where people were going in all different directions, some people correctly some people incorrectly. The last 5 miles of the course was quieter, shaded, and several rolling turns made it fun to navigate.


The bike had another first for me. For the past couple of weeks I have been finishing my bike rides with a flying dismount. I had decided I would not attempt to do it at this race but once it shortened I figured it was a must. Approaching the dismount line I swung my leg over and boom I was running with my bike. I didn't bust, trip, or take off a toenail so success! Success! Flying dismount aren't just for fast 15 year olds anymore! 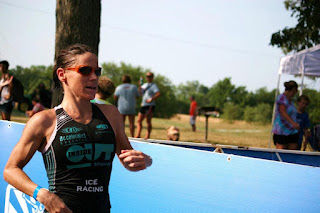 Again leaving transition I felt great. The run course was a lot less crowded than the bike course. During my first mile I got to watch the Pro women battling out the last mile of the run. I tried to use that as motivation for my run. The Muncie run course is not exactly flat but it is not exactly hilly either. I equate it to the booty loop minus Hopedale, oh and minus the shade. The course was always an out and back just now the turn around came 3 miles sooner (I really can't complain about that). As I got closer to the turn around, I realized there were few women from the prior waves ahead of me. I was feeling better and better about my run so I tried to kick is up a bit to close on those with the head start. I spent the last hill visualizing the finish line . . . and donuts (whatever gets you through it, right?)

Running through the finisher's chute, it was fun to see so many familiar faces. It was especially fun to see my little 2.5 year old niece cheering alongside the crowd of on lookers. I kinda like the way she rolls! 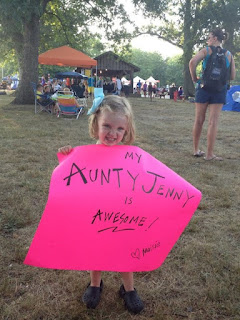 
For the second year in a row I won my age group but this year I managed to finish 8th overall! I had no idea I was anywhere near the top ten. Muncie was going to be my midseason fitness test. With the shortening of the race, I was not able to test my heat and distance tolerance but I got to spend some quality time with my family so it was still a win-win for me. I have to thank Blueseventy and Winskins for the awesome kit. After the race I received several compliments, from both age groupers and pros on the look of my kit. Kinda cool. What wasn't cool was returning to my transistion area to find my Blueseventy PZ3TX missing. I remembered throwing it down on my transition bag but it was nowhere in sight when I returned to my spot. The girl on the other side of the rack had what seemed to be one speedsuit on her towel. I doubted how my suit could have possibly found itself on her side but I went to check and found my suit tightly balled up with hers. I am not sure what happened, maybe a volunteer grabbed the suits to get them out of the aisle but I definitely felt a moment of dread. I feel a bit privileged to own the fastest speedsuit you can get . . . and yes it is worth it.