After a couple of days of venturing out on my own the rest of the Charlotte crew started arriving. Johnny Scoots arrived a day earlier than everyone else so we took the opportunity to rent a scooter and ride the entire bike course. Getting a working scooter was a calamity of errors but we completed the 39 mile loop . . . eventually. Cozumel is an amazing island. During our time on the scooter we may have been passed by 10 cars total AND there is a smooth recently paved separate bike path. It is a great place for a race and a phenomenal place to train! We rode from the center of the city to check out the swim start and then headed down towards the very tip of the island. The scenery just continued to intensify.
Eventually we stopped to swim for a bit in a moderately protected bay. I swam out for 10 minutes and turned around. Unfortunately I had to swim back against the current and it took me somewhere between 15-20 minutes. This left me a little concerned with for the swim portion of the race but I tried not to dwell on it and continued exploring the island. The west side of the island has a significantly rockier coast than the east side. The east side consists of pristine beaches, protected and undeveloped. Every now and then a beach bar would pop up but it is mostly just coast line. The cross winds at this time were not too intense and we just experienced a tail wind on the west side and a head wind on the east side.

Thursday, while most of America is running in turkey trots and/or stuffing their gut, we were out collecting our tribikes delivered by TriBike Transport and picking up our Race Packets. Luckily 10 of the Charlotte athletes and spectators were able to gather for a fine Italian meal at Sorrisi, Cozumel's premier Italian eatery. The real celebration did not begin until the next morning, however, when we showed up in our finest for the Ironman Cozumel Panties Run. Benefiting the local Humane Society we were all in on this one and we even made the local paper! We warmed up with a few stretches, did some yoga, ran a bit, and finished up with some zumba style dancing. It was great fun and we were a hit with the locals!


Unfortunately proximity to race day and Cozumel adventures are inversely proportional so the hijinx has come to an end as we all spend less and less time on our feet and more time painting on our game faces. Tomorrow is the big dance and I am very much looking forward to hearing those words once again:

YOU ARE AN IRONMAN
I have had a wonderful albeit long season but this has been a special year as I have been able to share it with some very special people. So here we go and good luck to all! Thank you all for your continued support and cheers. It is going to be a great day! 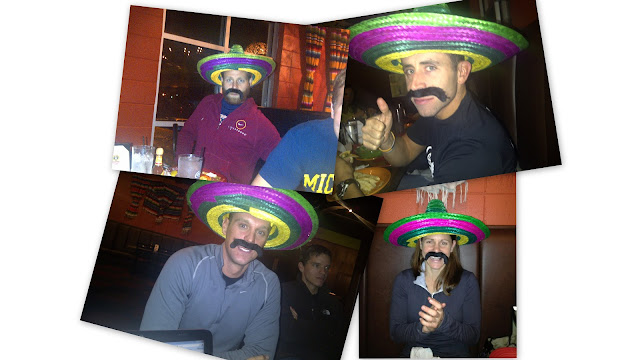