My initial plan was to wrap up my Rev3 Florida series with a review of the race itself but now that I am faced with that task I have very little to say about it. Florida was my first experience racing in the Rev3 series. I went to Rev3 Williamsburg and I was impressed but my opinion of Rev3 grew exponentially when I actually got the chance to race in an event. As a production team they do a lot to create the pomp and circumstance you might find at a Ironman event but they retain the casual friendliness you might find at your local triathlon. Without further ado, let's get to the bullet points you all have grown to love:

I had already started thinking about my 2014 race season prior to going to Florida but I had such a great experience I have decided to change what was going to be a WTC dominated season and instead weigh my 2014 season heavily with Rev3 races. Now if they would just announce the date of the new race in Mexico . . . 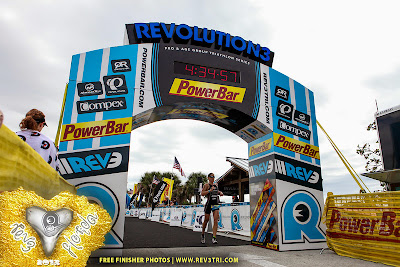 Ok, ok, this concludes my Rev3 experience. No mas!
Posted by CodaCoaching