Adam Furlong is a newb. He started doing triathlons in 2012 and is going places. In 2013 he qualified for the 70.3 World Championships in Vegas and competed in his first ironman at IMFL. He is a member of the prolific and dominating Wattie Ink triathlon team and is one damn good looking human being. Adam first came into my radar when he posted something about hoping to break 20 mins in his swim at USAT Age Group Nationals. I thought to myself this kid must have a swim background. I was quite surprised to find that he does not have swim background at all, he is just one tough cookie. For the past two years he has focused on becoming a better triathlete and he used his rowing background to understand and implement the basic mechanics of the swim stroke.
Triathletes are, by in large, classified as Type-A OCD personalities: CEOs, doctors, lawyers, and people that make their living by being meticulous and attentive to details. So why are so many triathletes willing to just throw away the first part of the race because “it’s not that large a portion of the race,” or “you can’t win the race in the swim,” or “it’s all about [insert fitness or technique, depending on whichever camp you want to use as a rationale], or whatever lame excuse they come up with? I really don’t know. But I know that’s stupid and I never do stupid things . . . the first time I ever used I wetsuit I zipped it up the front.  Fortunately, I looked around, realized that one of these things was not like the other and fixed it before the race started. But let's move on . . .

After I graduated college, I moved to Philadelphia for work as well as to row at Penn AC, a high performance rowing club on historic Boathouse Row with aims of making strides toward a national team selection one day in the distant future. Guys worked their asses off, for years on end, trying to experience the rush and sensation of taking just one single perfect stroke . . . and then maybe they’d take 2 strokes and then maybe eventually they’d take enough in a row that they would be selected to a national team, or race a world cup, or earn a medal on the international circuit, or perhaps even take enough perfect strokes to be selected for an Olympic boat and earn a medal at the Olympic Games. Those strokes never happened for me but when I stopped rowing I wasn't going to let those life lessons go to waste. 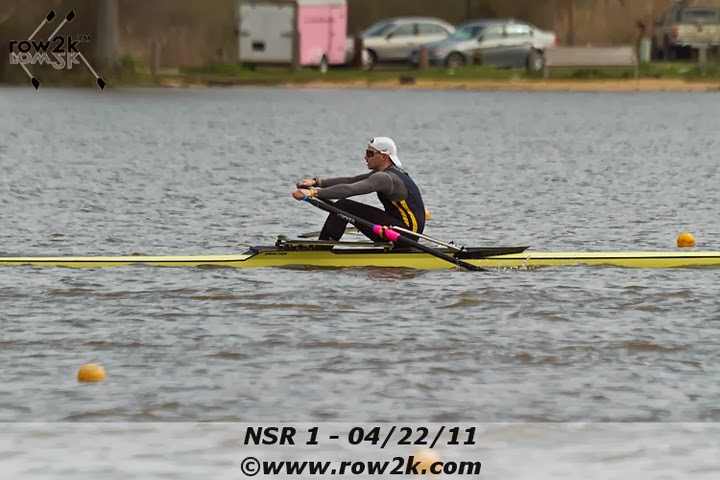 I started triathlons in 2012 hiring a swim coach right off the bat, a former Drexel swimmer named Tori Mayer.  I wanted to be good at this sport but I didn't know anything about swimming so I found someone who did and did whatever she told me to do (as every man should, duh). I told her my goal for the first year was to swim under 30:00 for 1.2 miles in a 70.3 race. I had no justification for this. It just seemed like as good of a benchmark as any. Prior to getting in the water with her, I knew what swimming looked like and I could mimic the freestyle stroke well enough . . . I think. The first thing we worked on was fitness because I was not "swim fit." We worked on technique a little bit but mostly we just swam, a lot (for an AOS).

At some point, I started thinking about swimming and how similar it is to rowing. The physics of moving a boat through water using oars are very similar to moving a body through water using hands and arms (but not legs because I am a terrible kicker). In rowing, you have a quick entry, backing the blade into the water creating a load of energy against the blade. Then you immediately drive your legs backward, keeping connection to the water through the blade, moving the boat past that location, until you have exhausted the stroke. At that point you take the blade out of the water as cleanly as possible and recover, while letting the boat move out from under you (free speed, as it’s called), until it is time to back the blade in again. HOLY SHIT!!!!!!!!! This is just like swimming! A clean hand entry ensures no disruption in velocity (or as minimal as possible), and then you quickly create tension via the catch, as close to the surface of the water as possible, so as to not lose water to move, and then you keep that connection to the water via your forearm and hand as you drive it past your body. Once the stroke is completed, you take your arm out, cleanly, to avoid disrupting the movement forward of your body, and recover, keeping your elbows high so as to not drag, or let your arms fall back into the water too early, or worse, in a position where you won’t have a good connection.

When this light bulb went on, my swimming took off. Continuing to train under Tori, I posted 3 70.3 races with swims under 30:00 getting me on the bike in the top 10 of my age group. That winter, I found a full-time triathlon coach, Brian Stover. I wanted a coach for 1 reason: I was doing IMFL and I was not stupid enough to think I was smart enough to tackle 140.6 miles alone. One of the reasons I ultimately picked Brian was because of his strong background in swimming and I’ll be damned if I’m going to pay him money just to be told to go pay for another swim coach (as some potential coaches suggested).

When I moved to Wellington, Florida in January 2013 for work reasons, Brian suggested that I might be interested in joining a masters group which happened to convene right across the street from my condo. HOORAY! The workouts were a lot of fun and they opened my eyes to a whole new concept: racing someone, every single day, on every single length. This was AWESOME. I will swim faster than you. I will learn to do flip turns so that I can swim faster than you. I will get faster during the piece as you slow down. I will do drills better than you. I will kick faster than you (okay, that’s a lie). But you get the idea. With a solid understanding of the physics behind every part of my stroke, all I had to do now was push myself to exhaustion on every single piece, and I’d get faster. Right? You betcha.

In 2013, I swam 26:00 on a slightly short 1.2mi piece, and then at IMFL, swam 28:30 on the first lap, before losing focus and exiting the water with a disappointing (for me) 1:01 swim. Despite not swimming quite as fast as I wanted (sub 59), that result still set me up for a good bike. Instead of dodging and weaving through traffic and facing moral dilemmas about drafting, all of which would have used up valuable amounts of energy, I got out early and had clear roads ahead of me for most of the race. I was able to put my head down, dial into my power, and ride with no one to worry about.


Everything in my life - work, relationships, training, etc - I approach with the mindset of being the best at it. There will always be people naturally gifted with better brains, looks, or bodies (Really? Is that even possible!?) but with enough attention to detail and a strong belief in #gtwd I’ve been able to make pretty large gains in my swim over a relatively short period of time.

But I’m not done yet.

I wasn’t happy with my time at IMFL, I could have been better, and I know that I need to continue making the swim a greater strength for me. So moving forward, I’ll keep refining my stroke, but I’ll also start throwing in some monster swim blocks - all my swimming last year was on a relatively modest 12-16k/week. As others have stated on this blog, moar is more. I know that with an even greater dedication and effort to getting faster I will do just that.