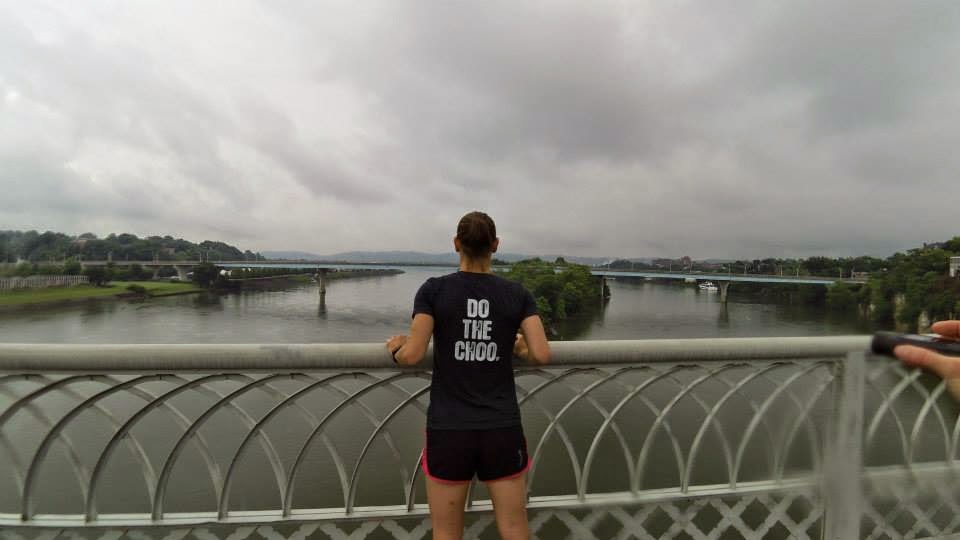 As I mentioned last week, I headed to Chattanooga for the weekend to swim in the USMS National Open Water Championships as well as to run and ride the IM Chattanooga course.

We arrived  to Asheville just as the sun was going down. Along with the sun, the temperature was dropping dramatically. Significantly under dressed, we got out of the car and went for a casual jog along the famous Wedge run route which is a flat out-and-back from the Wedge Brewery along the French Broad River. It is pretty spectacular, especially with a sunset.

Starting to feel cold and hungry, we dropped into a local restaurant I found highly recommended on Yelp, The White Duck Taco Shop. I will be the first to admit you just don't know what you're gonna get in Asheville but this place served up some seriously delicious tacos. I had the Banh Mi tofu taco and the special Mushroom and Potato taco. The Banh Mi was incredible. 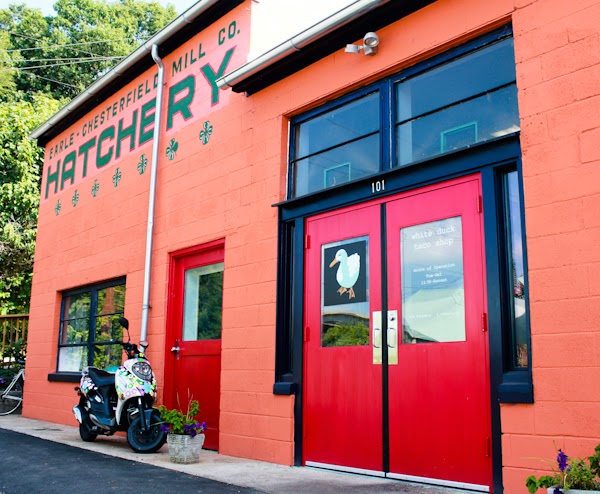 When we finally arrived to Chattanooga it was down right cold. Like 50 degree cold. I was too tired to dwell on this and fell fast asleep with little on my mind except the potential to oversleep in the AM.

I got up relatively early considering our late arrival so I could do my regular routine. Coffee - check. Small breakfast for the belly - check. Warm up on course - nope. We drove the one mile to the start very aware the temps had yet to break the 50 degree mark and it was beginning to rain. Luckily I thought to bring my Blueseventy warm ups but I still envied the swimmers walking around in their parkas and wetsuits. Needless to say, getting in the Tennessee River to "warm up" wasn't going to happen. Instead of warming up I sent angry text messages to Jeremy Gregory for convincing me to sign up. Some people were saying the water was hovering around 68 degrees, others claimed it to be a balmy 72. Honestly, at that point it really didn't matter. I put on my brand spankin' new Blueseventy NeroTX. I was given two - an orange and a black one and was very disappointed when the orange one was just a tad too big. {insert sad face}

Getting in the water actually wasn't that bad. Since the water was warmer than the air the river felt comfortable as I swam over to the start line. I was slow getting in so I did not have long to wait before the gun went off and since swimmers have more sense than triathletes there was no real initial sprint to take my breath away. We started our swim against the current and I was pretty happy with my position, near the front and more or less in the middle. Currents are the weakest close to the shore so I slowly made my way in the direction as the swimmers thinned out a bit. Eventually I got to be about a body length behind a woman who was swimming a pace I was pretty comfortable with for the first loop. Then this behemoth of a gentleman came sailing my way throwing his weight around with every stroke. At times I was convinced he alone was going to drown me. He would get about 3 feet away and then some barreling back until he was snuggling in my armpit. He would not go away and hung around through to the second loop until he finally dropped back (ugh, dudes). Even though I never felt cold, I did not feel all that great starting the second loop. I was swimming ok but I felt like I was having an out of body experience. I was swimming . . . but . . . I . . . wasn't. The pod in front of me wasn't breaking away but I was just going through the motions. Rounding the last turn, however, I felt like my body was dangling in the water. I suddenly realized I could not feel anything from the knee down and I needed this swim to be over. The competitive fire went out and I just needed to get out. When I finally got to the finish ramp I very gingerly exited the water and awkwardly made my way to the timing mat. All the volunteers were asking me if I was ok but all I could think about was getting to my towel and warm clothes. Once I got to my stuff several volunteers descended on me with hand warmers, hats, and hot chocolate. Before I knew it the race doctor was there and I was being rushed to the changing tent where I was stripped from my suit, placed in several layers of clothing, and ushered to a warm car. It took at least 15 minutes before I could hold a cup pf hot water without burning my hands and I was in the car for 30 minutes before the doctor would release me. For the rest of the day several volunteers stopped to tell me how much better I looked. I apparently I looked pretty awful coming out of the water. I hope there aren't any pictures to document my glamorous exit. It is scary how you can completely lose your sense of reality.

I ended up doing the 2.4 mile swim in 54 mins and getting 3rd in my age group. Since the swim was both with and against the current it was "an honest" swim course. Unfortunately the wind was blowing against the current so I never really felt like I was flying. The IM course is all with the current and a is a straight shot. Like the new Cozumel course it should be fast and easy!

I felt pretty crappy the rest of the day but after downing some hot soup and some more hot liquids I was feeling a ton better and went down to watch the ICE crew get their awards. I then went back to the hotel to take a nap to end all naps. It was fitful and feverish but it got the job done.

That evening we made our way to the Urban Stack, another Yelp recommendation. If the weather had been nicer it would have been pretty awesome to end the day on their patio but we still had an incredible dinner that started off with a nice serving of fried chickpeas and ended with a round of drinks.


The next morning we woke up to what I would call "a steady rain" and what Tim calls "a drizzle." How ever you want to call it, it was raining which put a huge damper on our plans to ride the entire IM course. We already arrived to Chattanooga under dressed and none of us was prepared to ride in the rain. After loitering around the hotel for way too long we decided to go on a wet run and head back to Charlotte. The run ended up being a lot of fun and gave us a chance to explore what Chattanooga has to offer. We crossed the foot bridge and ran around the arts district and the trails of Coolidge Park. Since we were each armed with a camera we took turns goofing off and filming each other. The physician who treated me at the race told me Chattanooga is the Boulder of the South. While at the time it sounded like an awfully lofty designation, I certainly can see it. Chattanooga really does have a lot to offer the athletically/outdoors inclined. I think an Ironman here will be really successful. Even though Chattanooga reminded me a lot of Louisville, the residents here will be a lot more receptive to the presence of the race and influx of athletes and spectators. I am super excited for all those "Doin' the Choo," especially Mrs. Honey Badger herself.