When I first heard about the NC/SC combined championship I was excited. One year I did both races separately and I really enjoyed them. I like riding my bike but I am no road racer. Time trials give me a chance to test my bike strength without having to contend with the swim and bike. Since the race would combine NC and SC athletes I knew it would pull quite a bit of talent from both states. Plus it would take place in Charleston. While I do not always need an excuse to go back to Charleston the chance to race on a flat and fast course I happen to know is compelling.

Next step: Convince some people the race is a good idea. Luckily I was able to talk James Haycraft and Andrew Lerner in joining me in this little road trip. I also took the opportunity to plant a seed to maybe do a short sprint triathlon the next day with the justification that we would already have all our bike equipment so why not? Luckily they proved to be more than willing and seemed to have me matched in enthusiasm.

We left Charlotte a little later than we intended. The good news is we missed all of the Friday night traffic. The bad news is we arrived to Charleston much much later than intended. Luckily the race did not start sending off participants until 9 AM so we were able to sleep in a little bit and grab what seemed like a leisurely breakfast and coffee on the way.

Mt. Pleasant Velo does a great job of putting on these races. If you have yet to attend one I highly encourage you to do so. The races are low key but well organized. Unfortunately the location of the start of the time trial had few amenities and by few I mean none. They had a couple of porto-potties but the race site was 20 miles from the nearest store. There was no shelter and no shade so you had to be prepared to handle racing, recovering, and relaxing in the 95+ degree heat and humidity.

We got there, I checked in, prepared my bike, blew a tire, prepared my bike again, and then headed out to warm up. Being on the bike was definitely preferable to hanging around the minivan. I hit a side road which I was told was "good long flat road" only to find it turn to gravel in the middle of my first interval. I knew something like this would happen but I trusted the input from a stranger instead. There is no such thing as a good side road in SC. Everyone knows this. Luckily I did not blow another tire but with 20+ minutes of warm up under my belt I decided to head back and start circling the start line.

I was last to go of the Cat 4 ladies and would be followed by two Cat 1/2s, Samantha Bendt and Erin Burton. The last time I did one of these I started dead last so it was going to be interesting to have fast ladies both ahead and behind me. When I rolled up to the start line I did not have much of an action plan. I knew I was not going to do the push start and immediately told the bike handler to back away from the machine. One day I will let someone hold me and my bike. When that day comes I doubt it will be a stranger and it will have to be someone who can handle my unjustified panic episode.

I wasn't sure exactly how my legs would feel during this hard effort having just raced Challenge Williamsburg less than a week prior. Early in the week my legs felt heavy and sluggish but I succeeded in hammering on some hard efforts Thursday so I was optimistic I would not feel that deep seated fatigue that sometimes lingers around after a hard race.

Nevertheless I made a point to start off conservatively and settle into a pace I knew I could sustain for an hour. At the end of the first quarter my average speed was exactly where I wanted it to be but I was shocked at how low my watts were. Knowing I could afford to push harder I upped the effort for the second quarter. I averaged 10 more watts the 2nd quarter and I still felt comfortable so when the third quarter started I pushed even harder still averaging below my FTP.

While it was not a windy day by any means I could tell we had a slight tail wind going out and would have a slight head wind all the way back. This allowed me to continue building my watts but I also knew it would make the race harder for anyone who went out a little hot. I was finally starting to pass the ladies ahead of me. I gave each a shout out as I passed as everyone seemed to be riding very very strong. Finally I entered the fourth quarter and made a decision to go as hard as I could for the remaining 13 minutes. My shout out to Jane West, a Charleston cycling legend, came out as a mere gasp as I put my head down and tried to make the most of the last few miles. 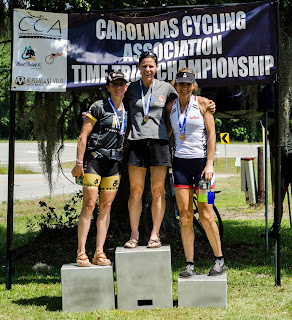 I crossed the line in 54:24. I knew I put down a tough time to beat but I also knew Erin Burton would probably put down a hard effort as well. I knew she would beat me but I just didn't know by how much. I ended up first in the Cat 4 ladies and 2nd overall to Erin. She got me by :40 seconds. I will take it!

The highlight of my race, however, is when James sauntered over in that way he often does. "So how'd you do?" he asked. When I told him I think I did a 54 something his face paled slightly despite the heat, "Wait, what? Really? I need to check my computer." He ran off and moments later returned triumphant. "Phew, I did a 53:18" Be afraid James. . . be very afraid.

I have been a little slow to get in the groove this year. There are a number of reasons and I am happy to talk about them under a different blog post. I have had to make a couple of changes to find my mojo and I am just now finding a bit more pep in my step. I currently do not feel as fit as I have in the past but I feel like I am making progress. While gaining fitness will always be an uphill battle there are things you can do today to make gains on race day. For starters, it might be time to take a serious look at your bike position. I have had my Cervelo P2 for 5 years now and I am no where ready to replace him. You bike should fit you like a glove and the only way to do that is to have a serious discussion with a bike fitting professional that knows fit and aerodynamics on a time trial bike. There are a lot of great fitters out there but there is only one in Charlotte who capable of making you faster. Take a moment to read these two posts and then make an appointment with James at Inside Out Sports. He has helped me tweak my bike position over the last 3 years and I can honestly say my position is simultaneously the fastest and most comfortable it has ever been.

A Few Thoughts
Another Thought or Two
Posted by CodaCoaching