Saucony is getting it right with their one-two-punch, the Kinvara and the Zealot. Wait, what does one-two-punch even mean? Are you supposed to count to 2 before punching? I have never punched someone so I don't know. I take that back. I have two older brothers. I am sure I punched them a time or two but I don't remember counting before I did it.

When it comes to shoes, I am no expert. I leave that to Melissa Bell and the amazing staff at Inside Out Sports. My story is probably very similar to most swimmers'. I grew up swimming and thought I was a pretty decent athlete . . . until I tried to run . . . or participate in any land sport really. It did not go well. Things hurt: my feet, my ankles, my hips. The first pair of *real* running shoes I purchased were probably actually a pair of racing flats because I didn't know better. They were on sale and they looked really cool. Not surprisingly 4 months later I developed a mean case of plantar fasciitis which cost me an entire summer of treatment and physical therapy. I struggled with it for another 8 years. Yep, 8 straight years of waking up every morning unable to place my heels on floor. For 8 years I did not wear flat flip flops or those cute little ballet flats all the refined and hip girls are wearing. I often wore a pair of high wedge flip flops which made me look like I was always ready to party but that could not be further from the truth.

In 2008 I decided to take my treatment seriously. I saw another doctor who told me I could get a cortisone shot once the inflammation I was experiencing was down to a minimum. 3 months later I received shots in both heels. These two shots were the most pain I have ever been exposed to in my sheltered little life; even to this day. I did not attempt to run for another month and when I did it was for no more than 10-20 minutes. In 2009 I did my first ironman. I was free!

Well sorta . . . I still ran in a pair of custom orthotics and I could only run in one kind of shoe, the Asics 20whatever. I continued to ice, massage, stretch, and even sleep in a boot on occasion. I was very sensitive to how my feet handled the constant stress I insisted on putting them under.

Then one day I was in Inside Out and Melissa had just returned from attending a run clinic up in Charlottesville, VA. If you didn't know UVA has an amazing running lab called the SPEED Clinic where they combine state of the art technology with the most up-to-date research to provide you with an in-depth biomechanical run gait analysis. You know those in-ground treadmills surrounded by cameras, TVs, and 3D imagery? Yeah, that kind of thing. One day I hope to see what it is all about! Well maybe. I don't think I could handle seeing my butt in 3D.

Melissa was discussing some of the topics they hit on at the clinic and one of them caught my attention. For some, orthotics are essential in order to run (or even walk) without injury but for most people orthotics are a band-aid to a bigger problem. They are NOT the solution. This idea was new to me. I thought orthotics were the only solution. In hindsight I am realizing I was given a lot of bad information. I was force fed correction devices from inserts, to custom orthotics, to over the top motion control shoes. In one way or another I struggled with all of them.

Needless to say, the conversation struck home with me so I started to focus on my biomechanics, strengthening my stabilizers, increasing the frequency of my running (not duration), and experimenting with shoes. With Melissa's help I was able to wean myself off orthotics and eventually out of a heavy stability shoe like the Asics 20whatever.

I started with the neutral but heavily cushioned Asics Cumulus and Nimbus. They felt heavy and huge and I felt sluggish and slow. I hated them. Then I tried out the Mizuno WaveRiders. Loved 'em. They may have sweet talked me with their superior color scheme but I was a smitten kitten. 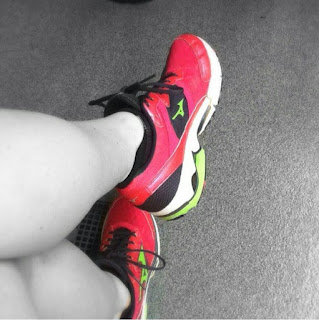 I eventually landed in a pair of Brooks Launches thanks to a recommendation from Brad Belfiore, amazing runner and former employee at Inside Out. Loved them. When I ran in the Brook Launch I felt like I was running on clouds. I had no idea running could feel that good. 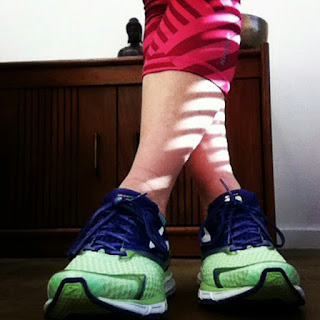 And then I Melissa introduced me to the Saucony Kinvara. I finally found the one . . . 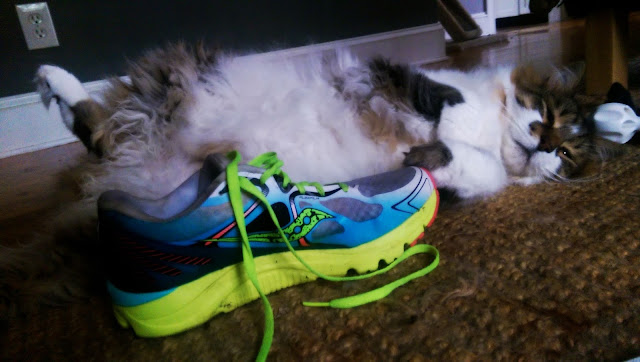 Saucony is doing great things with their shoes but they have been doing that since they started in 1898. I am by no means a running expert but since I have removed orthotics from my running repertoire I have a new appreciation for shoe design. I am finally in a place where I know what it feels like for a shoe to be "responsive" and it is a good feeling. In Part 2 I will be walking you through my current favs, the Saucony Kinvara and Zealot. Stay tuned . . .
Posted by CodaCoaching